What is the Dodd-Frank Act? | Garden State Home Loans | NJ

What is the Dodd-Frank Act?

An Overview of the Dodd-Frank Act 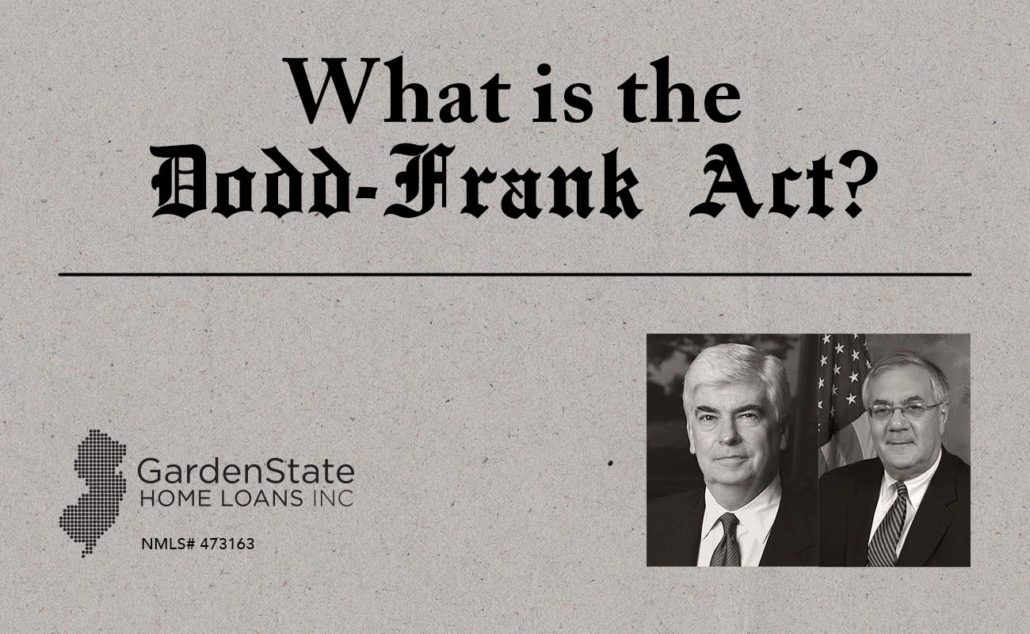 Since the 1970s and 1980s, with the rise of financialization and investment banking, the U.S. economy has been associated with one word: risk. As the 20th century came to a close, this association with risk was emphasized through multiple high-stakes incidents in economic history, from the fall of Enron to the unmasking of Bernie Madoff. All of this fed into the financial crisis of 2008, where the mortgage industry’s risk-taking, bolstered by deregulation, created a bubble and subsequent collapse in the housing market. Many financial firms keeled over, most notably Lehman Brothers, and stocks dropped worldwide.

In the aftermath of this crisis, the young Obama administration passed the Dodd-Frank Wall-Street Reform and Consumer Protection Act, in order to regulate the financial system and reduce the amount of risk present within it. With steps being taken in Congress and the White House to roll back various aspects of Dodd-Frank, the financial crisis and its effects have reentered the national conversation. But what exactly did Dodd-Frank change? And what would happen if these changes were reversed?

Dodd-Frank: What it changed

The Dodd-Frank act established multiple new federal offices and agencies to oversee various aspects of the financial system. Some of which include the Financial Stability Oversight Council, the Federal Insurance Office, the Consumer Financial Protection Bureau, and the Office of Credit Ratings. Each agency is a response to questionable financial practices used prior to the 2008 crisis, and is specialized to monitor one problem-area within the financial system. The Federal Insurance Office, for example, is meant to monitor insurance firms for un-checked growth or discriminatory practices. The Consumer Financial Protection Bureau is one of the more notable agencies established, as it takes an active role in enforcing federal financial law for the sake of the consumer. In addition to new agencies, Dodd-Frank also unloaded a slew of regulations, intended to be implemented over a period of about two-years. Some of these new regulations included:

This act, Title III of Dodd-Frank, is meant to increase congruence between different regulatory agencies so banking regulation is easier to achieve. It also increased the amount insured by the FDIC from $100,000 to $250,000.

Also known as the Volcker Rule, this act bans certain investment practices in order to reduce risk. By placing these restrictions on how banks can manage their assets, Dodd-Frank aimed to discourage speculative investments and avoid actions that could destabilize either the bank itself or the U.S. financial system as a whole. The Volcker Rule requires banks to disclose various aspects of their activity to the government, and as such requires large amounts of paperwork and reporting.

Criticism of Dodd-Frank and Its Future

Although Dodd-Frank was a reasonable response to the unraveling that occurred in 2008, many criticisms have been brought against the act in the years since its implementation. While some decry it as an example of government overreach, others more compellingly argue that the act’s robust reporting requirements place undue burdens on smaller banks without much effect on the types of banks that actually contributed to the financial crisis. Dodd-Frank’s new regulations did require financial institutions to fill out and process large amounts of paperwork and information, tasks that large banks were able to afford and streamline because of their size and asset value. Smaller banks, however, struggled to afford investing in these improvements and were largely pushed out of business.

The Financial Choice Act is a new proposal that aims to curb the negative effects of Dodd-Frank by rolling back several of the act’s regulations. Having just recently passed in the House and now moving on to the Senate, the Choice Act would greatly reduce the powers of the various agencies Dodd-Frank established, as well as remove the Volcker Rule and all its provisions. The act would also attempt to lift burdens on smaller banks through the implementation of a regulatory threshold that targets banks with assets of at least $50 billion.

The Dodd-Frank Act won many victories for consumers and created the regulatory environment in which a company like Garden State Home Loans was able to emerge. Since its implementation, Dodd-Frank has impacted the U.S. financial system in many ways and will continue to do so, even if repealed. Although the act certainly has room for improvement, a full repeal may buckle the U.S. financial system and could even re-introduce some of the trends that dominated the system prior to 2008. Everyone will surely be watching very closely as the legislative process plays out, both consumer and company alike. Regardless of regulatory freedom or restriction, we here at Garden State Home Loans will remain committed to providing you, the customer, with quality service and comfort in financial certainty.