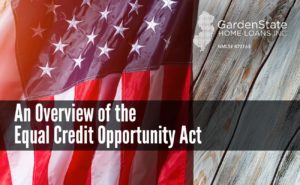 This includes those who receive a portion or all of their income from a public assistance program and those who have exercised their rights under the Consumer Credit Protection Act in good faith. This law applies to any person who regularly participates in credit-related activity through normal acts of business. This includes banks, retailers, credit unions, and credit card companies.

The ECOA and the CRA

People of color, women, and those of certain religious denominations weren’t able to get loans, even if they were qualified. The Equal Credit Opportunity Act passed 3 years before the Community Reinvestment Act (CRA), both helping to remove this discrimination.

The CRA was a way of re-enforcing the Equal Credit Opportunity Act. While discriminating against people because of their race, religion, gender was illegal, these companies were finding new ways to discriminate. Instead, they were using people’s low-income as an excuse to continue to discriminate against these groups. These laws work together to fight discrimination of any kind in the lending world.

Other Benefits of the Law

Creditors can’t ask about marital status if a candidate is applying for a separate, unsecured credit. The only stipulation is if the person lives in a community property state. Additionally, creditors can’t ask a person if they plan on having children or additional children. However, it allows creditors to ask about the number, ages, and financial obligations of any existing children.

The ECOA made it illegal to disallow regular sources of income, such as welfare payments or social security payments. The act also made it illegal to decline to consider any income earned from a part-time job, pension, annuity, or retirement benefits programs. Because of this law, creditors now must inform the borrower whether they have been granted or denied credit within 30 days of the application’s submission.

Creditors must give the applicant supported reasons why they were not granted credit or why they were granted credit under certain terms that they did not apply for. This rule also applies when a creditor closes an account, refuses to increase a line of credit, makes a negative change in the terms of the credit and doesn’t make the same change for other borrowers, or refuses to give credit under the same terms as were offered when the credit was initially applied for.