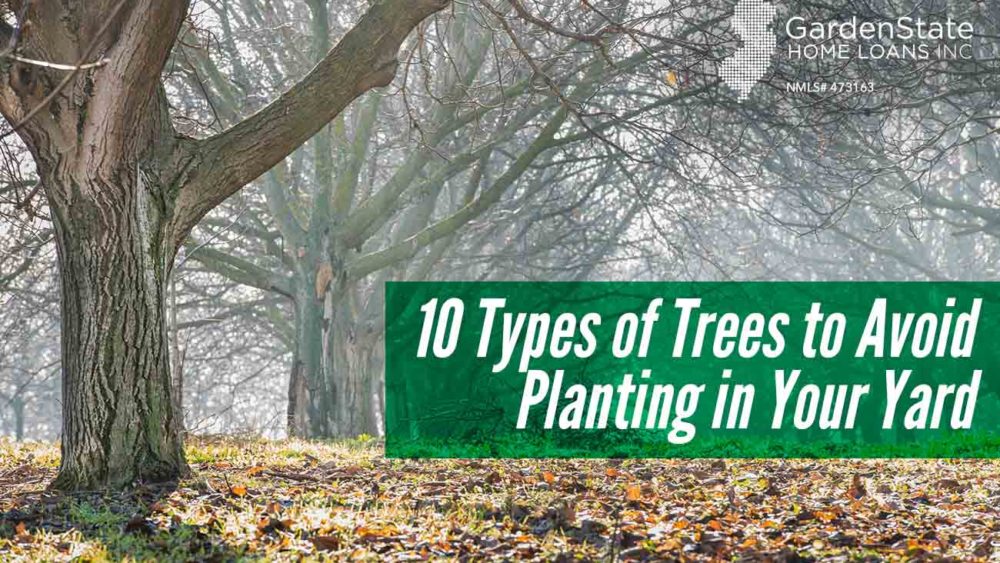 10 Types of Trees to Avoid Planting in Your Yard

Types of Trees Not to Plant

Your yard is just as important to your home’s appeal as the inside is. When decorating your lawn, here are ten trees to avoid.

The silver maple tree roots spread fast and shallow. They can easily bust underground pipes, especially if they are old and/or rusty. The tree itself is brittle. Wind or severe weather can snap the tree’s branches or knock down the trunk. If you still decide that you want a silver maple on your property, place it far away from the house, so damage can’t be down if/when it topples.

For the first 50 years, a yellow poplar grows strong and tall. However, after this time, the yellow poplar stats to decline fast. Quite like the silver maple, the yellow poplar becomes brittle and becomes victim to winds and severe weather. If you decide to plant one of these, keep it far away from the house.

A princess tree is also known as an empress tree. The princess tree grows rapidly. The seedlings can get spread all over your lawn and need to be pulled out by hand.

While most people love the look of the Bradford pear tree for its spring blossoms, the blossoms don’t smell as good as they look. They produce an odor that’s been described as rotten fish, and they attract flies.

Black walnut trees release a chemical called juglone, which is toxic for some other plants, especially for vegetables such as tomatoes, potatoes, and peppers. Their leaves can kill turf if not raked quickly and the green husks of the nut can stain clothes.

Cottonwood has very shallow and soft roots. In addition to their root system, the wood is prone to rotting, making it unstable in areas that have frequent severe storms. The cottonwood tree can also be damaged by insects and diseases.

The mulberry tree produces a large amount of pollen. If that wasn’t enough of a reason to keep the tree out of your yard, it also attracts numerous insects, silkworms in particular.

The female ginkgo tree produces a fruit that smells like dog poop. Once the fruit drops to the ground, it becomes sticky. You can still buy a male ginkgo, which doesn’t have the same issues. However, it’s hard to tell the difference between the sexes when the trees are young.

Sweetgum trees have large surface roots which can take a toll on your home’s foundation, lawn, pool, patio, and any other nearby structure. The tree also produces fruits that are difficult to remove from the ground.

There’s no doubt that weeping willows are beautiful. However, its roots suck out all the water from the soil, making it difficult to plant anything else besides the willow. In addition, they grow really tall. On average, a weeping willow is 75 feet tall but can grow up to 100 feet.